（Director of the Halle Saint-Pierre, Paris）

This text was contributed to Borderless Art Museum NO-MA: Ten Years of History (2014). The professional titles mentioned are those at the time of writing.

Since the mid-twentieth century, when Jean Dubuffet defined the concept, art brut has become a powerful and widespread phenomenon. What was once a marginal art form is now emerging from the darkness and winning an ardent following. As its reputation grows, so do the number of people who specialize in it and the opportunities to encounter it. Art brut has become a widespread and growing international phenomenon, with an increasing number of exhibitions, festivals, publications, academic studies, films, websites, and symposia dedicated to this art form.

Art brut from the West was first introduced to Japan in 1993. Parallel Visions, a touring exhibition of the Los Angeles County Museum of Art, was held at the Setagaya Art Museum (Tokyo) and other venues. This was the catalyst for a series of exhibitions introducing European collections (e.g., Collection de l’Art Brut [Lausanne], Métropole Museum of Modern, Contemporary and Outsider Art’s Aracine Collection [Lille], ABCD [Paris]) as well as exhibitions of works by classic artists such as Henry Darger and Aloise.

At the same time, the works produced by intellectually disabled people and their ateliers became known throughout Japan, mainly through the Able Art Movement, which was born in 1995 to promote the social participation of the disabled. In 1997, the Collection de l’Art Brut held an exhibition of works by eleven Japanese artists, which made Japanese art brut known in Europe. This led to interactions between several Japanese art galleries and the Creative Growth Art Center, a renowned studio in Oakland, California, in 2001 and 2003. Since then, the exchange between East and West has continued in the setting of art brut, and several Japanese artists have become known in Europe and the United States, while at the same time, art brut has been gaining recognition in Japan.

The Borderless Art Museum NO-MA, which opened in 2004 in Omi Hachiman, has sought to become a museum open to outside art and completely changed the landscape of art brut in Japan. Its determination to transcend cultural and historical boundaries, especially those separating the normal from the marginal, has led to fruitful international collaborations that have allowed the entry of Japanese art brut into the international art scene. In 2006, works by Japanese artists were added to the Collection de l’Art Brut.

The exhibition Art Brut Japonais held at the Halle Saint-Pierre from March 25, 2010 to January 2011 was a huge success in France and internationally, attracting nearly 100,000 visitors. The exhibition, which featured nearly a thousand works by 63 artists, was widely praised by the media. It was also the culmination of several years of collaboration between the two museums in Japan and France, which, based on their shared beliefs, pursue the goal of establishing the cultural value of art brut. The subsequent exhibitions in the Netherlands and the United Kingdom, as well as the awarding of a prize to Shinichi Sawada at the 55th Venice Biennale, which saw the participation of an unprecedented number of outsider artists, is a testament to Japan's reputation on the international stage of art brut.

The prospects for both the Halle Saint-Pierre and NO-MA are bright, and there will be many opportunities to enhance our partnership and to address many changes and issues arising as a result of the growth of artistic, social, media, and commercial reputation of art brut. We also have issues to discuss together. Globalization has already erased geographical and cultural boundaries. Art brut and the related disciplines have not been immune to its effects, and they have continually evolved as an open field over the years.

We must continue to search for new “fields” for art brut to enter, to question what the requirements of an art brut artist are, and so on. However, the criterion for this should be artistic quality. A piece of work becomes art only when it makes the viewer forget the biological, psychological, or social conditions under which it was created, and when it transcends its limitations to spread its wings freely and powerfully.

Art brut is the work of artists who, driven by the impulse to create based on the inspiration of their personal talents, produce works solely for themselves without considering the evaluation of others. We need to determine the curatorial standards for museums to exhibit these works, which are essentially different from conventional works of art. In addition, it is important to discuss how to avoid the danger of assimilating and neutralizing the differences of these works by exhibiting them in museums, and on the contrary, how to present marginal art so as to have the effect of disrupting existing art. In the early 21st century, art brut took on a new presence and brilliance. Although it is not a style, form, or school of art, art history can no longer ignore it. However, now that the geographical and cultural boundaries that once divided creative work have disappeared, it makes no sense to simply compare art brut with contemporary art in terms of aesthetics. Art brut is not an art form that directly challenges contemporary art, but rather an art form that communicates with contemporary art from a completely opposite perspective. The Halle Saint-Pierre and NO-MA have transcended national borders and are now both internationally recognized museums. They will contribute to a careful reflection on contemporary society through dialogue and shared experience. I hope that this commemorative journal will extend our collaboration to artists, philosophers, psychoanalysts, and sociologists, as well as to legislators and politicians who have the sensitivity to receive the message of art brut and recognize its great potential. 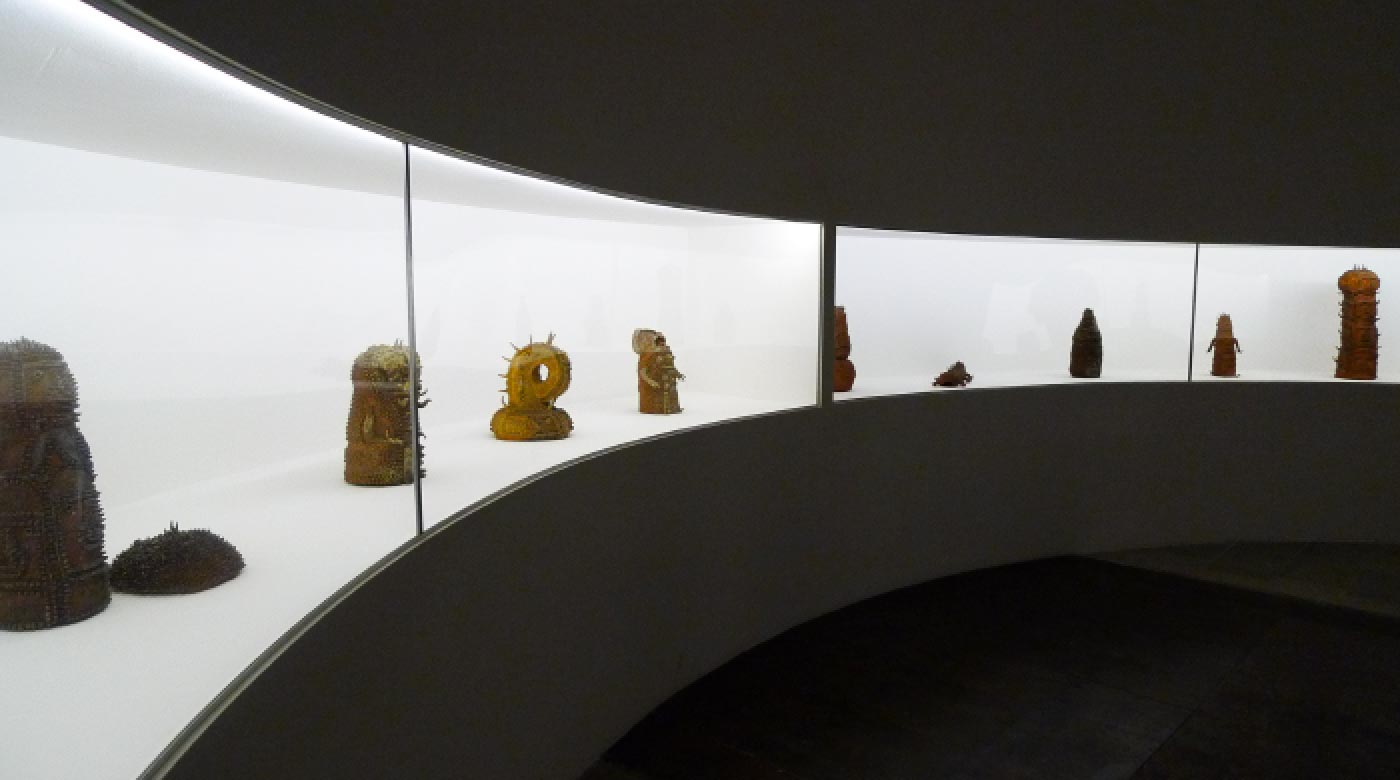 Exhibition of Shinichi Sawada’s works at the Venice Biennale

Martine Lusardy
As a leader in the field of art brut, outsider art, and folk art, she has curated more than 50 exhibitions and published numerous catalogues. Since 1994, she has been the director of the Halle Saint-Pierre in Paris, France.
(The profile of the author is extracted from the original text and refers to the time of writing.)